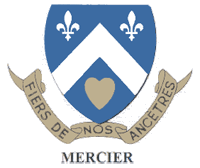 Coat of arms
Azure, with a white chevron accompanied in chief of two fleur-de-lis and in base of a
Gold heart.

The symbolic
The azure background evokes the heavens where the Mercier live and symbolizes peace, patience and
deep vitality.

The two lily flowers are reminiscent of Quebec’s emblem and motto “Je me souviens”
main cradle of Mercier in North America, their French and Catholic origin.
They symbolize the two places of origin of the Ancestors: France and New France.

The heart of gold represents light, sun, life, happiness. It symbolizes especially the
wealth of soul, spirit and heart, generosity and perseverance. 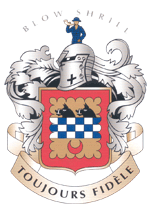 ARMOIRIES OF MERCIER
FROM ENGLAND

ARMOIRIES OF MERCIER
OF THE WORLD
We find the official documentation of the Mercier coat of arms illustrated above
in the Burke’s General Armory. The original description of the amres (blasson) reads
as following:
“Gold. cheque chequy az. and ar. betw. two boars’ heads in chief sa. and cress in base
gu. Engr. of the last. »
The translation of the blazon also describes the original colors of the coat of arms of the
Merciers as being:
“On a gold background: a horizontal strip on chessboard of blue and silver color included
between two black heads of wild boar in upper leaves and a red crescent at the base;
a red crenellated border. ”
Above the shield and helmet is a crest that is described this way:
“A hunter’s half-colored natural, blue jacket, blowing into a horn of
natural color: above his head is the motto: “Blow Shrill”. ”
Source:
Mercier’s book from around the world, printed in the United States of America by Heritage
Family Halbert / Halbert’s Family Heritage, 3699, IRA Road-Bath, Ohio, 44210 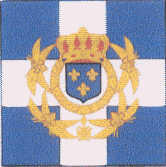 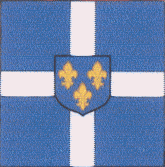